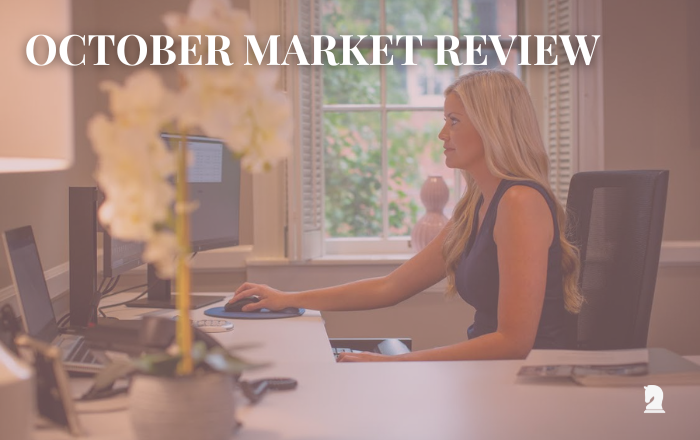 The nature of the market can at times lead us toward strange metaphors to explain its movements, but to spare you the one about a cart pulled by two competing horses, let’s describe October’s result directly:

Despite the Federal Reserve’s higher-for-longer interest rate strategy and persistently high inflation, strong corporate earnings helped push October to become the best month of the year for equity investors. In the end, the S&P 500 ended the month up 7.99%.

Large and small companies reaped the largest share of these gains as each of the 11 market sectors ended the month higher. And to put a feather in the economy’s cap, the U.S. Department of Commerce announced that after two quarters of decline in the gross domestic product, the third quarter – which ended September 30 – produced a positive 2.6% annualized rate of growth.

Also, while slightly less gung-ho than it has been, the domestic labor market continues to barrel forward with employment growth in nearly every sector of the economy. Unemployment is now at its lowest rate, 3.5%, in more than 50 years. Consumer spending is strong.

October wasn’t all exuberance, however. Economic indicators continue to suggest the strong possibility of a recession: domestic manufacturing continues to weaken, the housing market is showing strain from higher interest rates, and, despite strong spending, consumer confidence is weakening.

Before we explore other events of the month, let’s review the headline numbers.

The over/under across the Atlantic

In the United Kingdom, October brought the 44-day saga of former Prime Minister Liz Truss to a conclusion. The administration’s historic brevity was spurred by a market revolt after the announcement of a fiscal plan at odds with the Bank of England’s inflation-fighting strategies.

The big question now for the United Kingdom’s Tory governing majority is whether its third prime minister within a period of two months, Rishi Sunak, and its third new chancellor of the exchequer in the same period, Jeremy Hunt, can restore economic stability and political credibility.

OPEC pulls back on supply

The OPEC group decided nominally to reduce production by 2 million barrels per day. In practice, this will result in about 1 million fewer barrels per day, which still represents the strongest action by the group since the early COVID-19 days of spring 2020. However, a strong dollar and heightened recessionary risk have put oil prices down about 20% from midyear.

Yields up, spreads elevated and the future in futures

Spillovers from the U.K. and new expectations about interest rates in the U.S. led to sharp increases in Treasury yields. One-, three-, six- and 12-month Treasuries saw respectable yield increases through October while intermediate and long-term Treasuries saw more moderate increases. Spreads remain elevated, which – in light of Treasury yields at 15-year highs – has made corporate and municipal bonds attractive for buy-and-hold core positions.

Global economic growth is expected to slow to 1.5% in 2023, the lowest level of growth in four decades, excluding the early days of the COVID-19 pandemic and the Great Recession. The negative near-term outlook has been driven by lowered growth expectations across globally developed economies.

Weak global demand for tradeable goods seems likely to impact trade-dependent economies of Asia, including China. There, confirmation of China’s Xi Jinping’s party leadership for a third five-year term has done little to allay fears that the new administration will adopt a more constructive approach toward the evolution of the global economy.

October may suggest a nearing end to this bear market, but the prudent investor should continue to maintain balance and manage risk against potential downswings as this volatile period continues. Inflation, interest rates, global political disruption and all the factors that suggest a coming recession remain strong reasons for caution.

Leading indicators on inflation point to improvement over the next six to 12 months, but the timing and degree in the shorter term remain unknowns and volatile economic data is likely to correspond with volatile equity markets.

We are proud to continue to serve your financial goals and thankful for your continuing trust. If you would like to discuss this monthly report or any aspect of your investments or financial plan, please reach out at your earliest convenience.